Mental Health Awareness Week: A crisis we must solve together

Every working day in the UK, two construction workers take their own lives – hundreds of good men and women whose time ends before it ever should.

In mental health awareness week my thoughts, naturally, turn to the child whose dad never came home or to the parents of the young apprentice, who had their whole life ahead of them – the list is long and sobering. The word crisis is often over-used, but in this case surely it is spot on or maybe even understated. So, as we raise mental health awareness this week, let’s look at what the industry is doing and how we can tackle this together.

Let’s be frank, if we had two construction workers a day who died on site through poor safety, the reaction would be so different. Moreover, let’s be honest, it is different. Despite still having some way to go, the construction industry, has moved mountains in relation to safety over the past decades. In the 1960’s and 1970’s there were hundreds losing their lives every year, through poor on-site safety – now we consistently see less than 40. The UK has one of the lowest workplace death rates in the world. You only have to look at the excellent safety record of our Olympic Games in 2012 compared to those that have followed, to show we are world leaders in this area.

So now the time has come for us to lead the world again. This time the battle isn’t before our eyes and we can’t simply touch it or make a modification – it is hidden and silent, but sadly deadly. So, my question is, where is the industry-wide outcry? Well it has started and I think the last five years have seen us build the foundation to fight this battle together.

At the Guild we haven’t hidden from the challenge – we’ve tackled it head on. All our managers and team leaders have attended mental health first aid training and we regularly receive guidance on support available and our offices are signposted with support. Most importantly, I believe it is a place where mental health can be discussed and supported openly. It isn’t a topic we hide – I have personally been supported by colleagues in my own battles.

The Guild approach, in its simplicity, may hold a lot of the answers. The workplace has to be open, tolerant and supportive. Our friends at the Lighthouse Club working with organisations such as Mates in Mind and Mental Health for England have done superb work to support construction workers. This year the Lighthouse Club have rightly called for the following 5 steps to tackle the crisis. 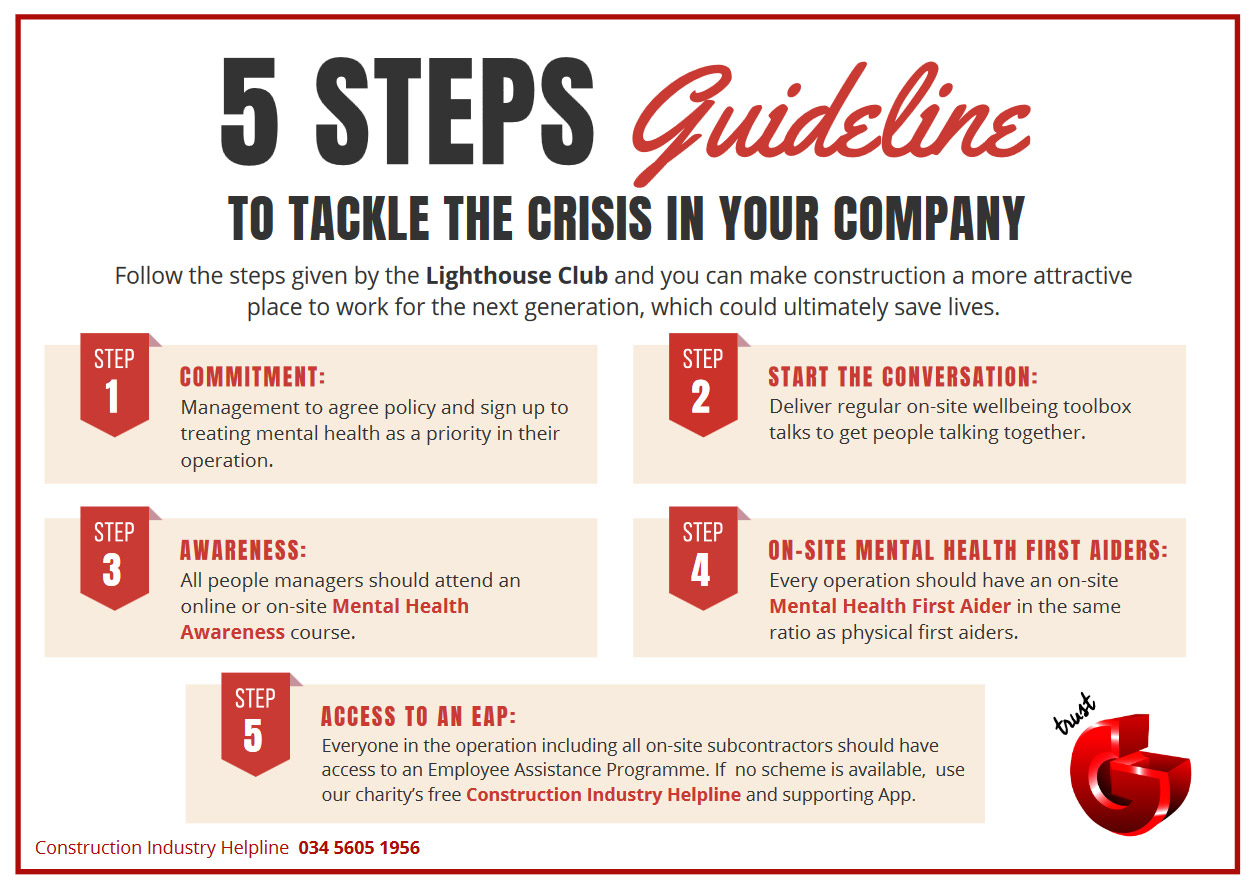 Following these simple five steps incurs little cost, makes construction a more attractive place to work for the next generation and could ultimately save lives.

So, the time has come to pull together to tackle this crisis. I’m delighted to announce that this week The Guild will be signing the Building Mental Health Charter – and take yet another step in supporting good mental health.

For those who need support, we recommend the Construction Industry Helpline – This is a 24/7 helpline with the slogan: “It’s time to change, it’s time to talk.”

In these uncertain times and at any other time, remember, it’s ok to talk.

Request Callback
Fill out the form below and one of our friendly staff will be in touch with you shortly.
The Guild, Fifth Floor,
79 College Road, Harrow, HA1 1BD

This website uses cookies to improve your experience while you navigate through the website. Out of these cookies, the cookies that are categorized as necessary are stored on your browser as they are essential for the working of basic functionalities of the website. We also use third-party cookies that help us analyze and understand how you use this website. These cookies will be stored in your browser only with your consent. You also have the option to opt-out of these cookies. But opting out of some of these cookies may have an effect on your browsing experience.
Necessary Always Enabled
Necessary cookies are absolutely essential for the website to function properly. This category only includes cookies that ensures basic functionalities and security features of the website. These cookies do not store any personal information.
Performance
Cookies which collect information about how visitors access and use a website, including which pages are most (or least) popular, and the pages clicked through to reach them. These are also known as ‘statistics cookies’.

They can be used to restrict the number of times you will see a particular advert (although we do not host third party advertising on our website), or to draw your attention to other website content that may be of interest to you (‘related article’ links, for example).

They are also commonly used to enable social media components of a website.
SAVE & ACCEPT